Young Dentist Of The Year Nomination 2011 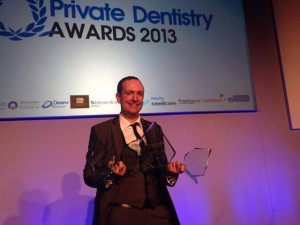 The Berkeley Clinic has been awarded four prestigious Private Dentistry Awards 2013 including ‘Best Treatment of Nervous Patients’, ‘Best New Practice’, ‘Practice of the Year (N)’, and ‘Practice of the Year (UK)’! The 2013 awards ceremony and dinner were held at The 5* Hilton Hotel in London where our team members received the awards.

A Private Dentistry Award is now recognised as one of the most valuable external guarantees of a practices performance. The independent panel of judges identified and rewarded the very best in the private sector of dentistry. The Berkeley clinic team is extremely delighted to have won such high-status awards. We would like to thank everyone for the support, especially, the esteemed panel of judges.

This entry was posted on Monday, November 4th, 2013 at 11:44 am and is filed under News. Both comments and pings are currently closed.

« Halloween at the Berkeley Clinic
Best Scheme for Treatment of Nervous Patients! »